Your experience is our priority
We use cookies to provide you the best possible experience to successfully secure you a new home. Cookies allow us to improve our products and services by improving our website experience, delivering our clients valuable and relevant content, offer cost-saving solutions, etc.
Allow all cookies    Use necessary cookies only

What impact do higher interest rates have on housing prices in The Netherlands?

Cost of financing in the Netherlands

One of the main drivers of housing prices in the Netherlands, other than supply and demand, is the cost of financing.

When we talk about the cost of financing, what we’re really referring to are:

This last element plays a major role for a lot of buyers. In the Netherlands, we see that a majority of homeowners (>60%) have a mortgage. This figure is significantly higher than our neighbours in Germany (26%) and compared to the European average (25%). On top of that, the Dutch system allows you to have a mortgage up to 100% of the value of the property. Which has an upward impact on prices. 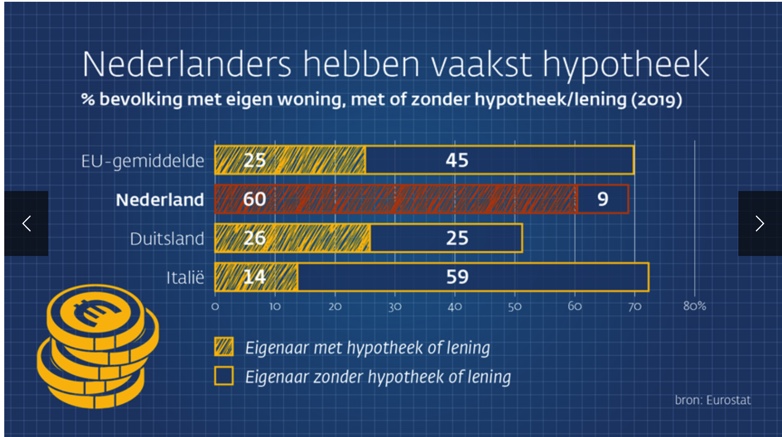 A historical look at interest rates

If we look at the historic interest rates for a mortgage in the Netherlands, we see that interest rates are at an all time low. Up until the early 90’s, interest rates were around and above 8%. Whereas currently in 2022, interest rates (fixed for 5 or 10 years) are far below 2%. Of course, this isn’t only referring to mortgage rates, but to national and global rates in general - which also applies to your savings account. 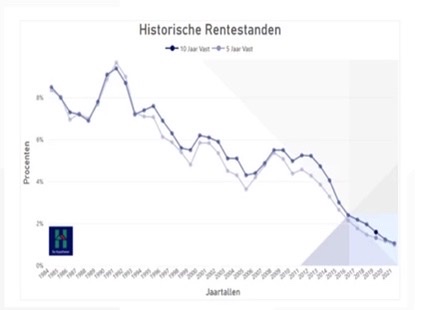 Current financial situation and expectations for 2022

Current geopolitical conditions are having a downward impact on interest rates in the market, which can also result in mortgage rates going down.

Inflation and the housing market

Secondly, interest rates are also influenced by inflation. Actual inflation rates are quite high - even above 7%2. This most likely means that interest rates on obligations will rise and as a result, the interest rates on mortgages will follow the same curve. The exact impact however is not yet clear and will depend on the decisions made from several central banks. 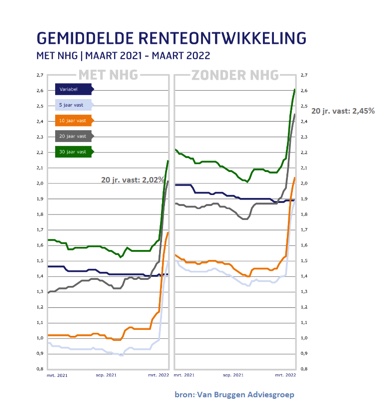 The most relevant question for you of course is to understand the expected impact of higher mortgage rates on housing prices.

Full disclaimer - we cannot predict the future, as many conditions play a role in housing prices.

However we do know that two major components play a very important role defining the purchase price of a house.

The first major variable is the economic principle of supply and demand. The current supply of properties is still too low to be able to meet the current demand. Numerous studies have indicated there’s currently a shortage of around 300 000 homes.

And although developers and the government are trying to facilitate the building of new properties, it is likely that the objective of creating 100.000 new houses per year will not be easily achieved.

Main reasons are the high prices of raw materials, the lack of employees in the building sector, and the limiting regulations for nitrogen emissions. These three factors often result in the delaying or cancellation of potential new build projects, and keep the supply in the market lower than we’d hoped for.

The second important factor, which we covered in the beginning of this article, is the cost of financing - which is highly impacted by mortgage rates. The remaining questions then are: by when and by how much. As described above, the answers will only be discovered in the next coming weeks and months ahead.

However, we can give you a tip already.

Housing market professor Peter Boelhouwer predicts that an increase up to 3% will only slow the rise of purchase prices of properties. Only above 3% might it be that purchase prices will drop.

If you’re interested in exploring your mortgage options, we’d be happy to connect you with our recommended partners. Schedule a call today!

buying    mortgages    interest rates
How can we help you?
Help me buy Help me rent
Latest Posts

How jobs and employment work in Eindhoven (and the Netherlands)

Buying a house in Amsterdam - how it works for expats

Costs of living in Groningen - how expensive is it?

How to buy an apartment or house in Eindhoven

The Essentials: Employment, Costs of Living, and Jobs in Rotterdam
Looking to secure
a home?
Help me buy
Help me rent