Your experience is our priority
We use cookies to provide you the best possible experience to successfully secure you a new home. Cookies allow us to improve our products and services by improving our website experience, delivering our clients valuable and relevant content, offer cost-saving solutions, etc.
Allow all cookies    Use necessary cookies only

15 things to do while living in Rotterdam

Welcome to the largest port city in Europe! Loosely translated to a dam constructed on the River Rotte, Rotterdam encapsulates the traditional European experience but with a special twist.

Owing to the world war years, a large part of the city was devastated. Through the years, Rotterdam has had to reconstruct itself and revive what was lost. In this process of destruction, reconstruction and reinvention - this city has emerged as an international hubspot.

If you have stumbled upon this Dutch city and are wanting to explore it, there is a chance that you are stuck in a maze of multiple options; there is so much to do, after all! Fret not because we have prepared exactly what you need - here is a list of 15 things you can do in Rotterdam:

1. Enjoy international cuisine at the Markthal

You’ll find an indoor market hall in various world-class cities. However, its combination with luxury housing is what makes Rotterdam’s Markthal unique. The apartments are arched over the food market in a horseshoe configuration. Thankfully for the residents, the ceilings are so high that you can’t actually peak into the houses. However, they sure can spy on you. The main hall houses the market itself with various international shops and restaurants, along with a supermarket and a four-story car park situated below. As you wander amongst the market stands, look up to enjoy the massive artwork sprawled across the ceiling: the ‘Horn of Plenty’ by Arno Coenen and Iris Roskam. 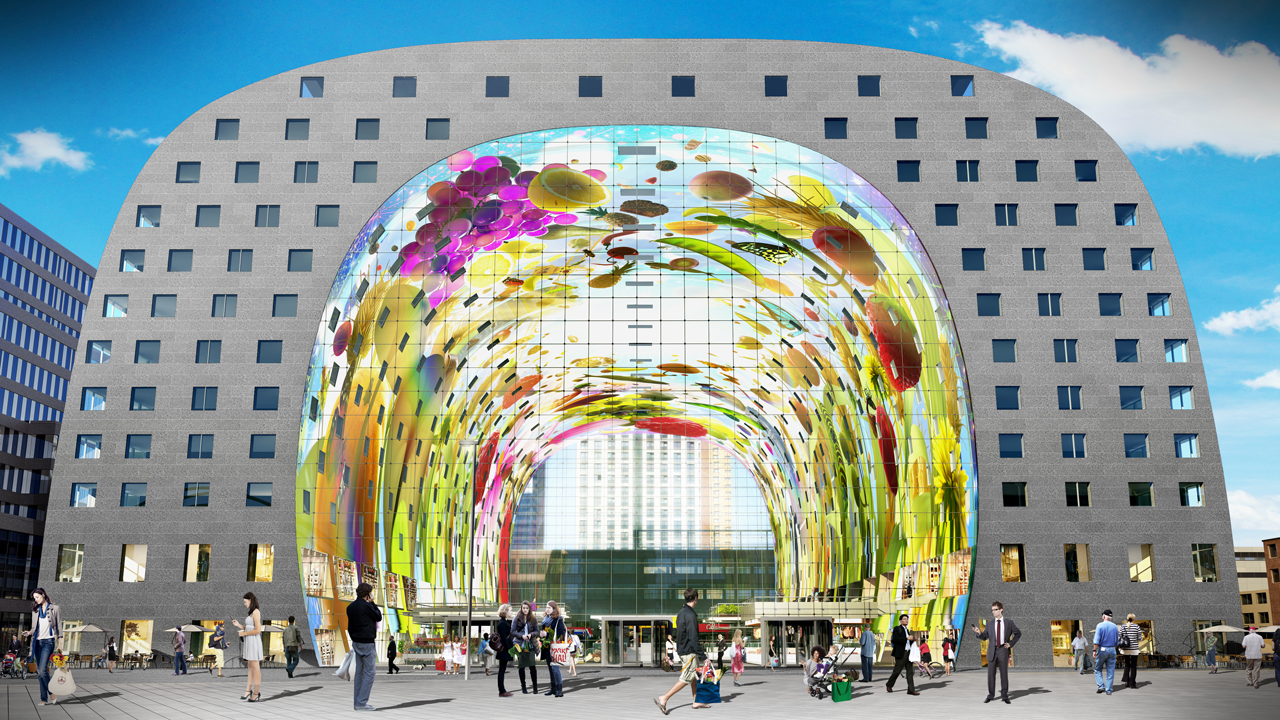 2. Take a peek at the Cube Houses

If you’re nearby the Markthal, then you’ll hardly fail to miss these. The iconic Cube Houses of Rotterdam dominate the scenery here. It’s the perfect Instagram shot and the ideal place to take a wander. The Cube Houses, designed by Piet Blom, are part of the Blaakse Bos (Blaakse Wood) development which borders the Laurenskwartier district and the Waterfront area. The architect attempted to design a village of sorts within the city and saw the houses as trees and the whole area as wood. The Cube Houses are tipped to one side with three sides facing the ground and three facing the sky. Don’t forget to visit the Kijk-Kubus (Show-Cube) to experience what life is like in a Cube House! 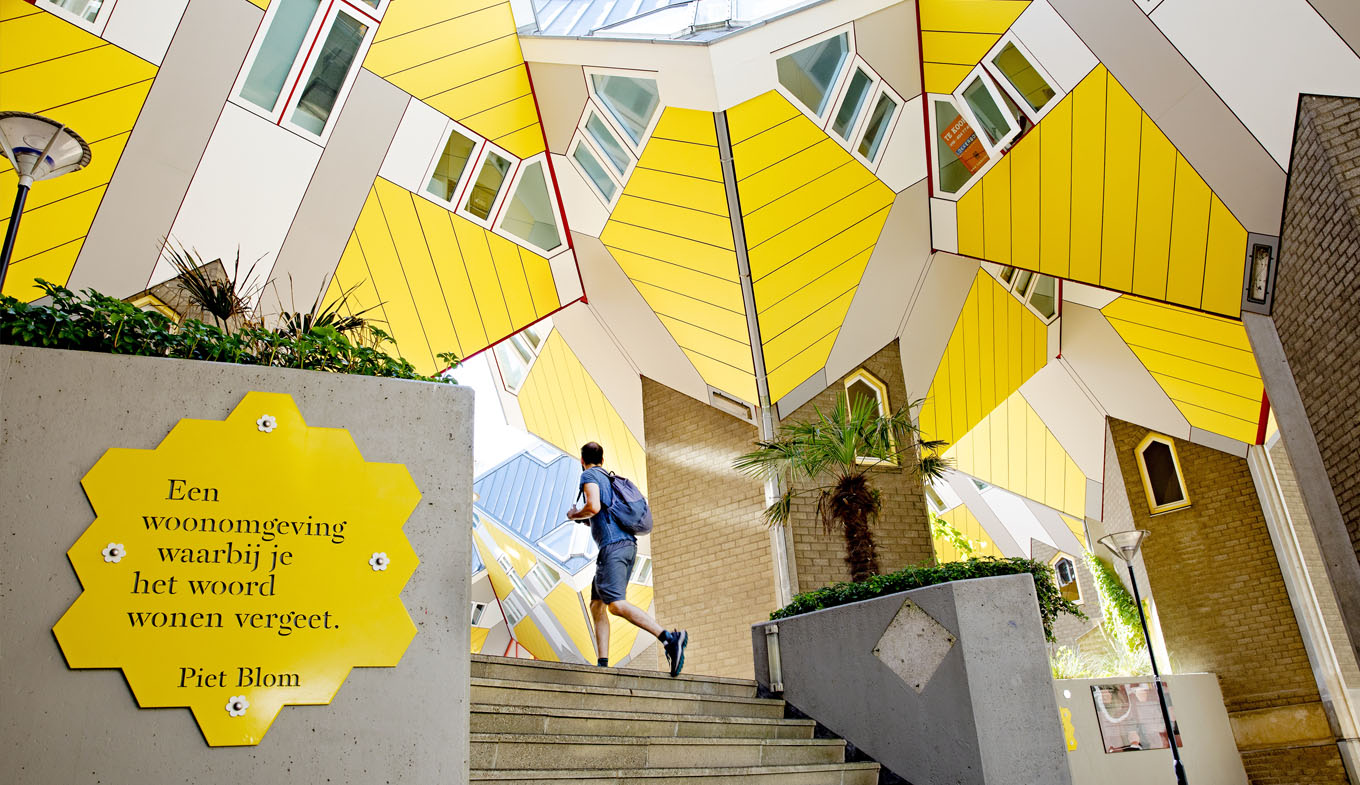 3. Check out the Kinderdijk Windmills

Windmills are an iconic structure that has come to define the Netherlands, and is one of the main things people associate with the country. Approximately 20km to the east of central Rotterdam lies the small and charming village of Kinderdjik. What makes this village an especially magical place however is the many windmills that line the canals here. The 19 windmills stand proudly, have been restored to their original condition, and are now a UNESCO World Heritage Site. This truly is a delightful place to visit and its surrounding countryside and network of canals is extremely impressive. 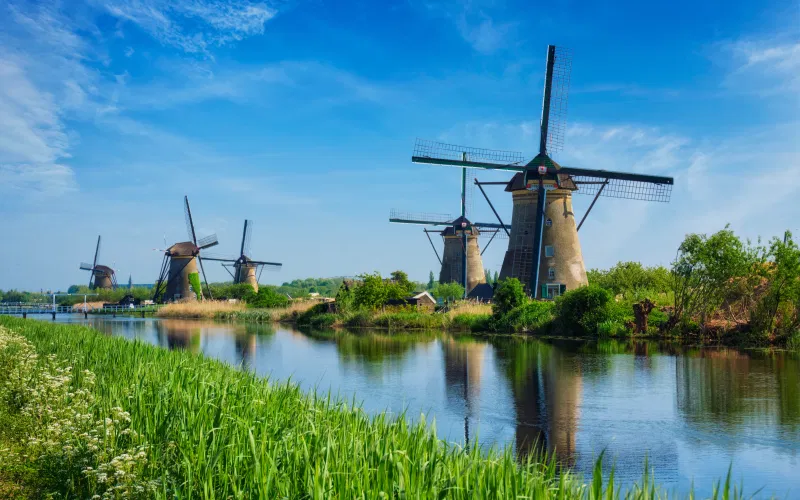 4. Make a Pilgrimage to Delfshaven

The old district of Delfshaven, unlike much of the rest of Rotterdam, survived WWII largely unscathed. It has a remarkable history, both as the departure point from which the Pilgrim Fathers sailed to America and as the birthplace of prominent Dutch maritime hero Piet Hein. Delfshaven locals once earned their living by fishing for herring and distilling gin. The historic canal houses now hold cozy shops selling antiques and bric-a-brac, as well as lovely cafés and restaurants like brewery De Pelgrim and café De Oude Sluis (with waterside patio dining). Erected in 1960, the 185-meter-high Euromast tower houses two restaurants with superb city views, each at the 92-meter mark. The tower, made from reinforced concrete, has an inner diameter of 9 meters with walls that are 30 cm thick and is located at the north entrance to the Maas Tunnel. The Euromast lift takes just 30 seconds to whisk visitors to the observation deck and restaurants. The Euromast is Europe's only attraction from which you can abseil to the ground. Next to the tower, you can find the park with some lovely cafes and restaurants. This is the perfect place to escape from the busy city. There’s plenty of green space to sit down, read a book, or sunbathe. And last but not least, you can also feed the ducks on the lake in the middle of the park. 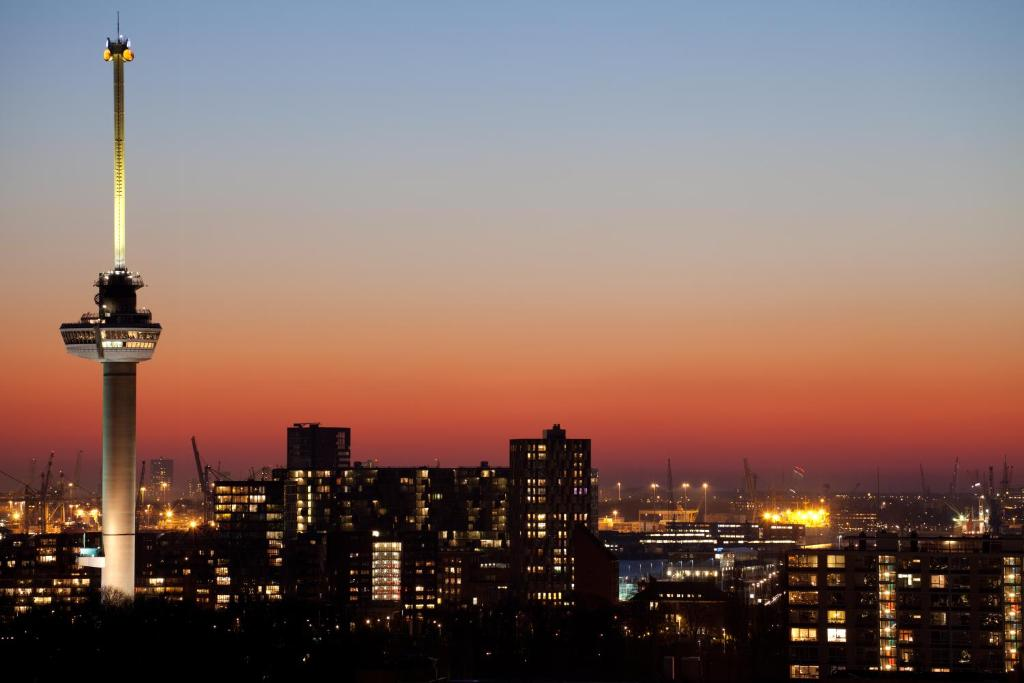 Established in 1857 and one of the oldest zoos in the Netherlands, Diergaarde Blijdorp is well known for its successful breeding programs. The zoo is split into different themed areas such as the Chinese garden, a Malayan Forest, Mongolian Steppes, and a crocodile river. Also worth exploring is the zoo's Oceanium, a fascinating aquarium featuring a large collection of marine life from the Americas. Diergaarde Blijdorp really is a fantastic place for both children and adults alike.he wide variety of enclosures and interactive elements will provide hours of fun. An indispensable part of Rotterdam: the water taxi! A tourist attraction - but also a very practical in terms of transport. For example, to get from the center to the South, all you have to do is hop onto the taxi. There are 50 different berths located in Rotterdam and Schiedam; and the area is divided into three tariff zones: East, West, and Center. In and between these zones, fixed fares per person are applied. The eight- and twelve-seater water taxis are available on request. You can make a reservation via the app, website, or by phone. The SS Rotterdam is a large ocean liner that was originally known as the Grande Dame and constructed in the 1950s. As the former flagship of the Holland-America Line, SS Rotterdam has sailed the seven seas. The ship was one of the last lavishly decorated liners and retired in the year 2000. Over the years the ship has had many names aside from the Grande Dame, including the Rembrandt, and is now located in the waters of Rotterdam as a hybrid hotel and museum. Guided tours are available of the ship's bridge and engine room which provide an interesting insight into how the ship operated during its glory days. 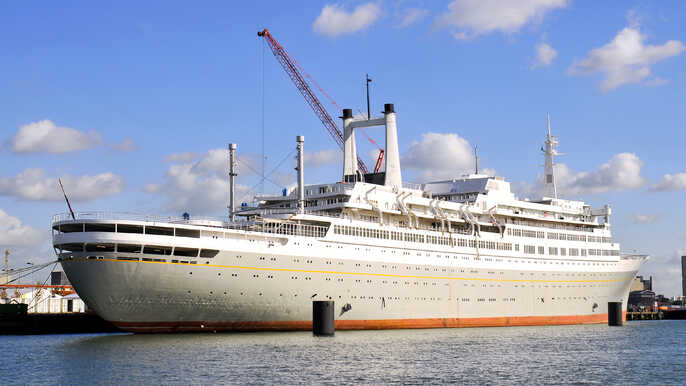 Santa Claus, popularly known by locals as the Buttplug Gnome, is a 2001 statue designed by the LA-based artist Paul McCarthy. This sculpture deserves a special mention. Officially, the work represents Santa Claus holding a Christmas tree in his hands. But the artist has implied that it could also represent a buttplug, and that "...For me, the sculpture is also about the consumer community - as a commentary on material consumption in the Western world." The statue has traveled all around the city but is currently located at Eendrachtsplein. 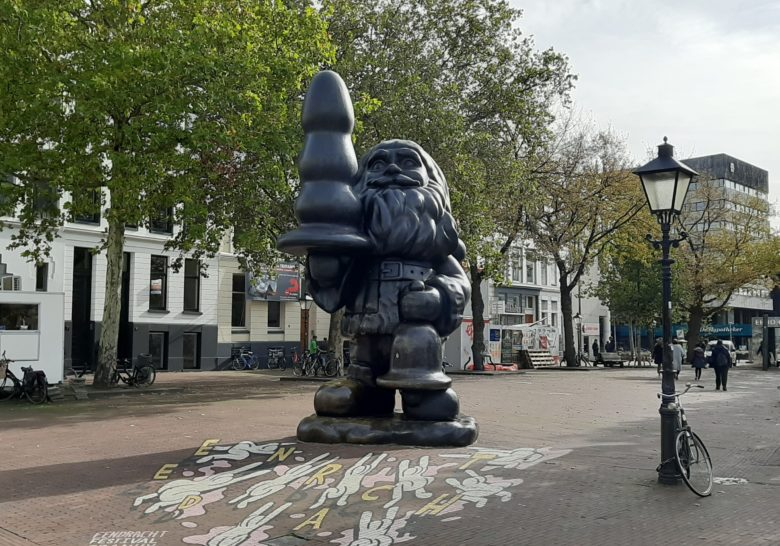 Barbecuing at the beach, going to the “De Kraal” petting zoo, jogging around the plas (lake): there is no Rotterdammer who does not enjoy the Kralingse Bos. It is a versatile recreation area in the middle of the city that was awarded the prize for best outdoor space in the Netherlands in 2007. There are plenty of fun activities to do such as kayaking or the fun forest, a climbing course at a unique height. Also, the Kralingse Bos is the place where some of Rotterdam's best festivals are held during the summer! 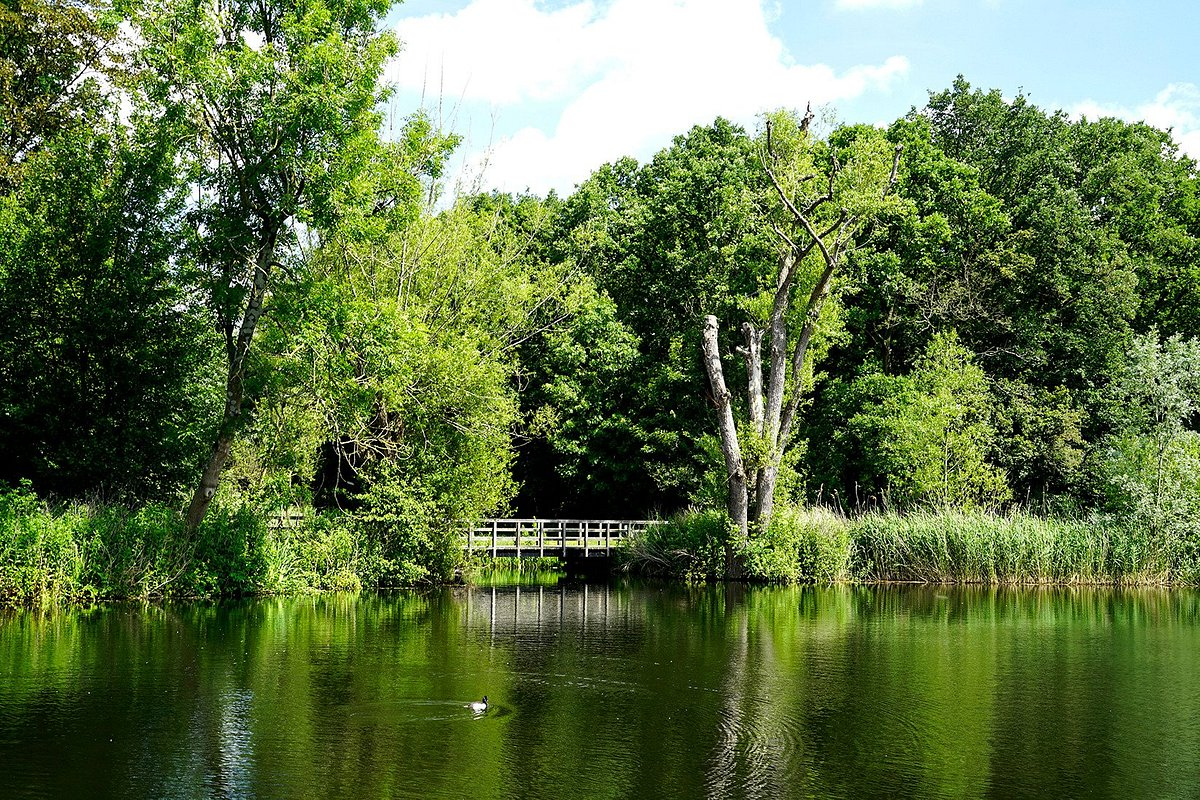 Hotel New York is the former head office of the Holland America Line. From here, many people left the Netherlands for North America, hoping to find a better life. Since then, a lot has changed and the former headquarters has been transformed into a luxurious hotel and a restaurant/bar. Hotel New York stands between two impressive skyscrapers at Kop van Zuid. Hotel New York is one of the best places to stay in Rotterdam and while it certainly isn’t on the cheap side, the building and area around it are lovely. If the sun is out you should definitely have a drink and sit on the terraces. It gets busy in the summer and it’s hard to find a seat, but it’s definitely worth the wait. 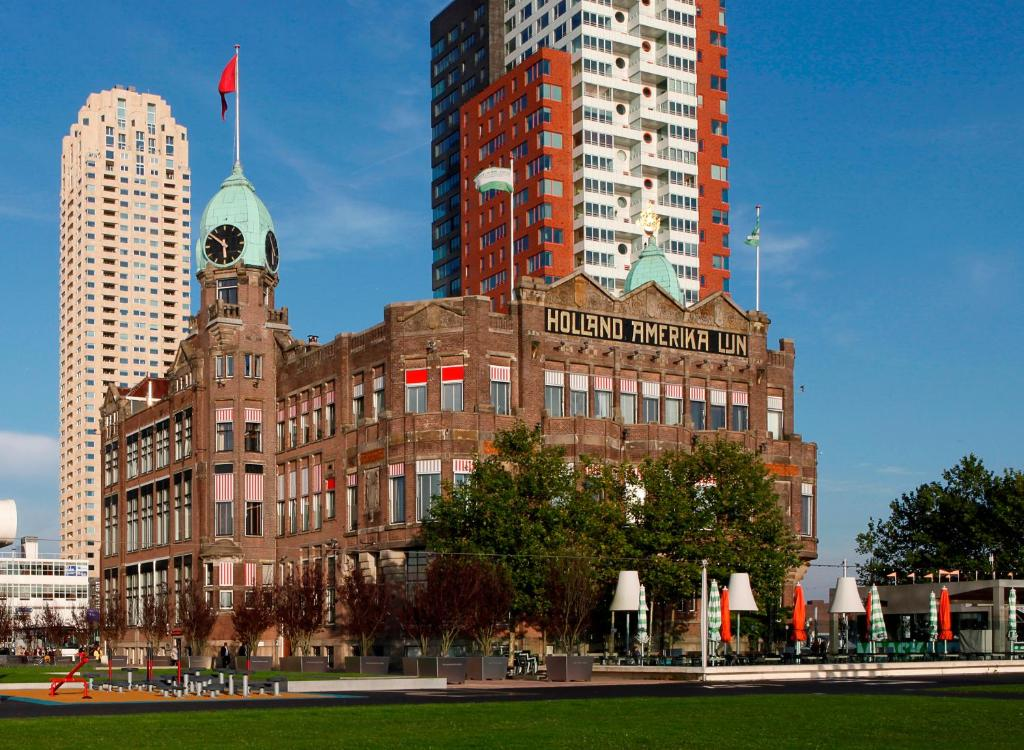 12. Score your new outfit at the Lijnbaan & Koopgoot

The Lijnbaan is the main shopping street of Rotterdam. It was opened in 1953 as the main pedestrian street in the new shopping district, after the old shopping district was completely destroyed during the war. A few decades later, the sunken shopping arcade, popularly called 'de Koopgoot' was added to the shopping district. There are more than 80 shops in the Koopgoot, partly covered and partly open-air. Also, it offers entrance to metro station Beurs, one of the city's most-used stations. In Rotterdam’s shopping district you can find all the big chains for fashion, lifestyle, and gifts and you will definitely not come home empty-handed! Looking for yourself in the 1664 mirrors of Depot Boijmans Van Beuningen is an activity in itself, but the iconic building was designed to store and exhibit art. The world's first publicly accessible art depot has opened its doors. Visitors see the result of 172 years of collecting. More than 151,000 collected works of art are stored together, arranged, and structured in fourteen depot spaces with five climates. In addition to the objects, all the activities involved in the management and maintenance of a collection can be seen. 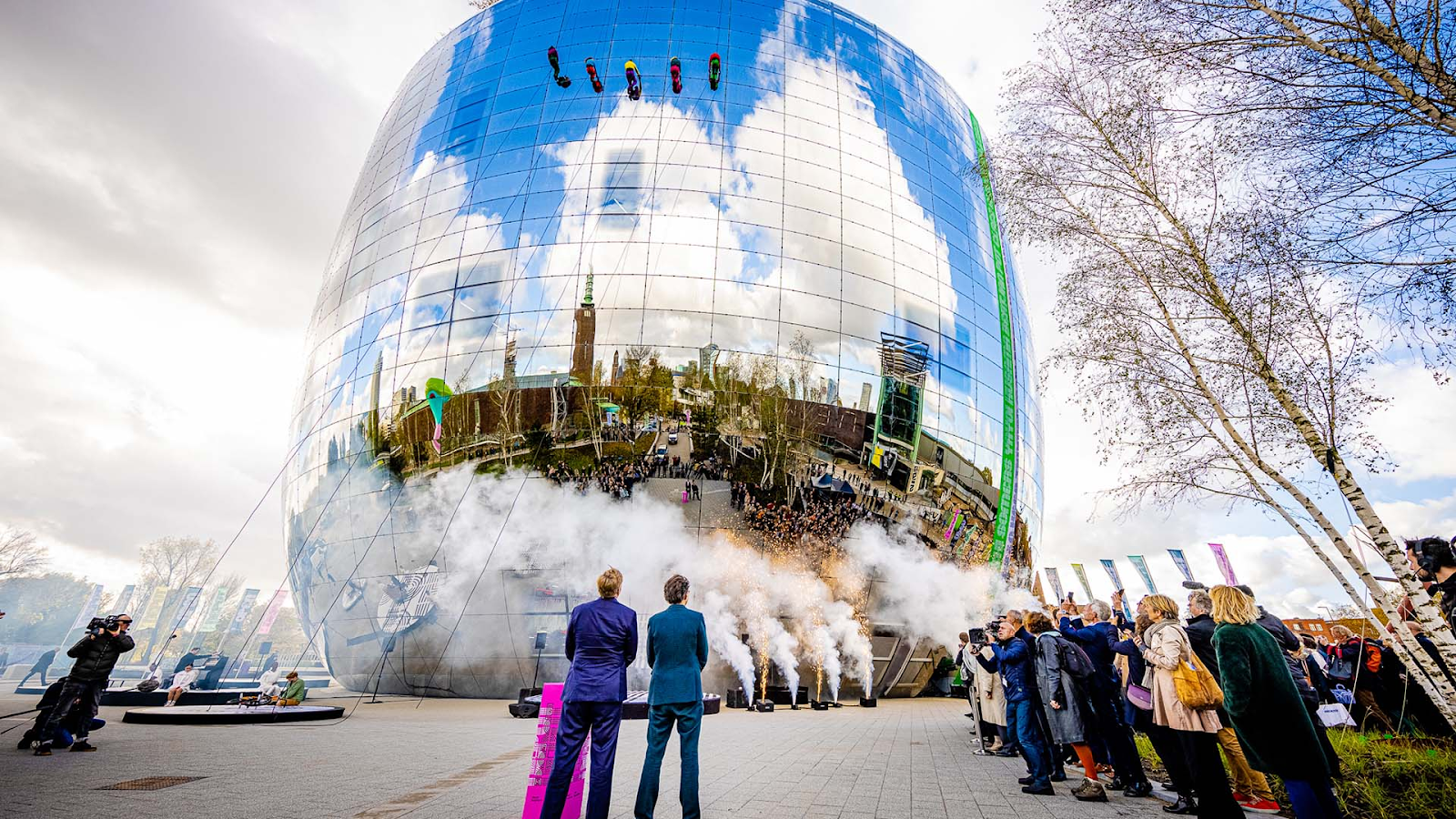 14. Celebrate your weekends at the Witte de Withstraat

The Witte de Withstraat is the hippest cultural nightlife street in Rotterdam. Lots of art galleries, popular cafes, restaurants, and shops that are just a little bit different. The great atmosphere of the Witte de Withstraat is enhanced by the many terraces on the street. A must-visit for those who live in Rotterdam! The most famous Café De Witte Aap was once voted the best bar in the world by the Lonely Planet, so you HAVE to have a drink over there. Across the street is the trendy Nieuw Rotterdams Cafe, located in a stately building that housed the former office of the newspaper NRC. 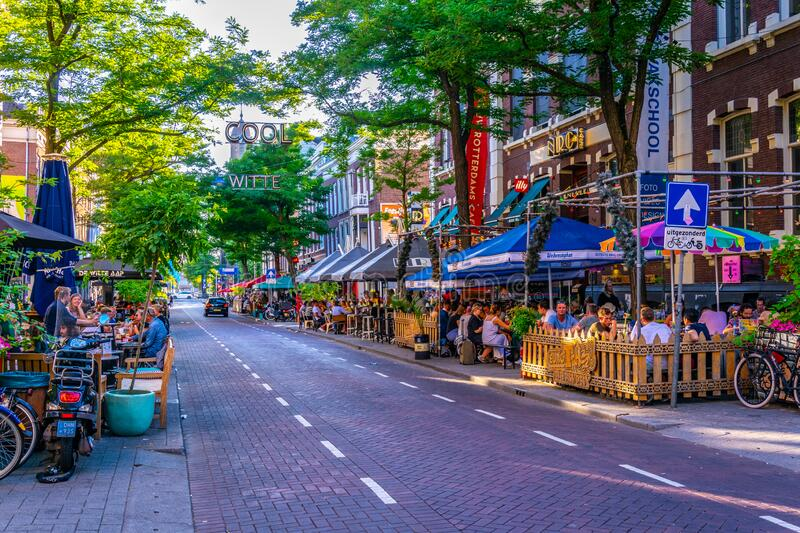 Rotterdam is a beautiful city during the day, but when the sun sets, it becomes magical. The impressive skyscrapers, the famous Erasmus bridge, and many other constructions light up the city. Walk across the Maasboulevard or the Coolsingel, Rotterdam's main street in the city center. You can wander for hours and the view becomes different every time. You are most likely to find the perfect venue for your preferred night out. Rotterdam's nightlife has quite the reputation. In the 80s and 90s, people came from far and wide for the Rotterdam dance scene. Today, the focus is much wider, and all trends are well represented. Clubs can be found in interesting and unexpected locations throughout the city. 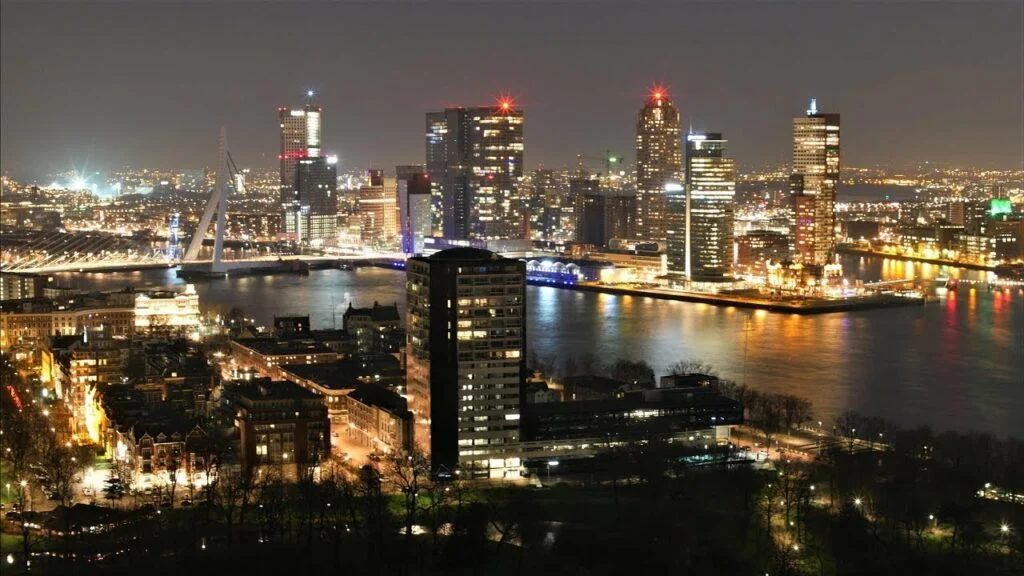 So there you go, that was Rotterdam in a nutshell - a city that knows not only how to entertain a busy cosmopolitan life but also knows how to slow down. Every city has a story to tell and if you look closely, Rotterdam’s story is one that you shouldn’t miss out on!

Make your way through the port city and let us know all about your Rotterdam adventures!

rotterdam
How can we help you?
Help me buy Help me rent
Latest Posts

Finding a job in Groningen